Before heading out for the day today we had to go to a meeting with our RSD travel guide to find out the itinerary for our stay in United Arab Emirates. We didn’t really want to go as we wanted to get off to Ferrari World, but we have to know when we are leaving this hotel tomorrow and also we had to get our passports back as he had taken them to get them scanned for us at the hotel last night since we arrived around 2am. 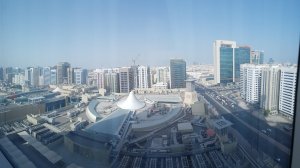 The meeting was ok, but a lot longer than what it had needed to be. Basically he was trying to sell us tours to go on while we are in UAE. I understand it is something they have to do to make more money, but the way he was going through them he made it sound like we HAVE to go on their arranged tours while we are here, it wasn’t until the end that he gave us a price list and said it is up to us if we want to go on the tours or not. We chose not to go on any of the tours, and just do our own thing instead, I don’t think he liked this as we are a group of 6 and if we had gone on a tour that if quite a bit of money, there was also another group of 8 that didn’t go on many of the tours, so to be honest the guide wasn’t very happy.

I don’t mind if someone is trying to sell tours, as there were some that sounded interesting, and it is good for people who haven’t made any plans or is unsure about what to see, but I don’t think the meeting needed to last an hour for a holiday that is only a week long. All that is needed is just to say; if anyone is interested we’ve got a few tours, these are the tours – give a description – let me know if you’re interested, here’s a price list, done.

What we also think seems a bit strange is that the guide is saying he doesn’t know when we’ll be picked up from the next hotel to go to the last hotel, as he doesn’t know which hotel out of 2 we will be staying at… Very strange, but I’m sure it’ll work out.

Anyway, after the extremely long drawn out meeting we got our passports back from the guide and then headed off to Ferrari World. The staff at the hotel (Grand Millennium Al Whada) was very helpful and pointed out that because there is 6 of us it will be cheaper to get a taxi than public transport. The hotel concierge advised a ticket for public transport would be about 35AED each, but a taxi should only be about 60-70AED all together, so we got a taxi, which was quite nice as it was a lot quicker than public transport would have been as well. It ended up being around 80 AED for all of us, but that’s still cheaper than public transport, and this is with the taxi driver going to a petrol station on her way as one of her tyres were flat…

Ferrari World was a lot bigger than I though it would be. I had seen pictures and videos on You Tube, so I knew the park is all inside, but it looked a lot smaller than what it actually is. Ellie did have some issues when we were going in to the park, as the jumpsuit she was wearing was a little bit too short, so she got to borrow a wrap around skirt to cover the top parts of her legs, the skirt was only a couple of inches longer than her shorts anyway, but what I thought was strange is that we had to leave Phil Sr driving licence as security that we would return the skirt. I was a bit surprised that they made her cover up because Jackie’s shorts were about the same length, but they didn’t make her cover up. My shorts were a little bit longer as I had put a bit more thought into what I packed for this holiday to make sure I’m dressed appropriately for UAE culture.

I am not great with big rides, they terrify me. However, I surprised myself by going on all the rides at Ferrari World, although I only went on them one time each, except for the go-carts, which I went on twice.

One of the rides, called Turbo Track goes really fast from inside the building and then vertically up though the ceiling in the middle of the building, it looks like you are going to come off the track and then it drops back down again. Absolutely terrifying. Phil, Paul and Ellie really enjoyed that ride and went on it 4 times I think! The park was actually really quiet, probably because we’re not in peak tourist season anymore, so one of their goes they came back down and asked if they could just stay on it, which they did. I honestly don’t know how they can do it. 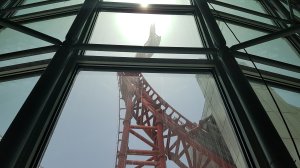 The big rides in Ferrari World started inside, then took you outside. It was a strange feeling when you went outside on the rides because suddenly you could feel the heat after being in an air-conditioned building, even though I was going fast on the rides the breeze didn’t cool me down, and it was almost a relief to get back inside again. Don’t get me wrong, I like that it’s warm, but when you’re on a ride, even for a short amount of time you can’t control where the sun is, if it’s going to be in your eyes, and you can’t really wear a hat and sunglasses on the ride.

Phil Sr and myself thought we would be brave and go on a ride called Flying Aces, we had a look at it from the viewing point before we went on and we were bricking it. Apparently it had the highest loop in the world, but the loop is kind of heart shaped because the track twists at the top… Deep breath… But we got on the ride, then we were waiting, then there were some strange sounds, then the bars across out bodies went back up, then they put them back down again, more strange sounds, then they took the bars up again… I have to say, this is not helping my nervousness! The staff told us it was going to be a few minutes but we were welcome to wait until the ride was back up an running… Err, no thank you! So we all got back off it and went to find a different ride. I think both me and Phil Sr was happy for the excuse not to go on the ride. I did go on the ride later in the day, but this was after I had seen it go round the track once after the issues while we were waiting, I had to make sure it was still safe to ride. Once I did go in it I hated it. There were a lot of sharp turns and my head kept sliding off he headrest, but then again I don’t like big rides anyway, Phil, Paul and Ellie enjoyed it.

I have to admit that looking at photos from rides is quite funny, I look like the most miserable person in the world because I am terrified but I keep my mouth closed and keep a steely expression on my face because I’m just waiting for it to be over.

There were quite a few rides and things to see at Ferrari World, a few of them were closed, probably doe to Ramadan and the season, but most things were open, and like I said earlier I did go on everything that was open. When the others went back on rides for a 2nd or 3rd go I stayed back and watched the bags and took some photos. The coaster I didn’t really mind was Fiorano GT Challenge, it normally have 2 coasters running next to each other but it was only one running today as it wasn’t busy enough for both.

I also really enjoyed the go-carts. it was only the electric ones inside that were running, apparently they also have petrol ones outside. To go on the go-carts it was 35AED extra, we all went on them the first time, but when we drove them again before we left for the day Jackie and Ellie watched instead. I have never done go-carting before but I really enjoyed it. I did keep hitting the barrier on the side though but because they were electric they didn’t goo too fast so it didn’t really matter. I felt like I was in a game of Mario-cart.

Although I don’t like big rides I still enjoyed Ferrari World, it might just be because I like seeing and experiencing new things, I probably would go back, but I’m not sure I would go on all the rides again, it is nice to go to theme parks with other people and not just me and Phil, because at least this way Phil has someone to go on the rides with when I don’t want to go on them. We were able to get a bite to eat at Ferrari World as well as they had sectioned a couple of restaurants off so that we were hidden from view with it being Ramadan.

By the time we got back to the hotel it was 6pm, so it was only 1 hour until fast was breaking and all restaurant would reopen so we all went and got showered and ready back in our rooms before meeting on the 3rd floor of the hotel, which has a passageway that connects to Al Wadha Mall. The mall was nice and a lot bigger than I expected, and practically deserted, so I didn’t feel like I was fighting my way past people like I usually am in Meadowhall. At the meeting this morning the tour guide made it out like we would really struggle to get a table anywhere because once fast was over everyone would go out to eat, but this was just to try to get people to sign up to the evening tour with a meal that he was selling, because we didn’t struggle to get a table anywhere. We ended up eating at TGI Fridays which was nice.

After our meal we went back to the hotel and to the bar attached, Porters Bar. Jackie, Ellie and I got vouchers for a free drink, but we could only use it for either Cuba Libre or a Tequila Sunrise, I don’t like coke and I don’t like tequila but I decided to try a Tequila Sunrise, it is a free drink after all. They were both awful! Way too strong and just not nice at all, it’s nice to get more alcohol, but I don’t think it was good quality alcohol, we didn’t finish our drinks, and just left one the guys finished their beers. I will also point out that people are allowed to smoke in the bars in UAE, for a non smoking group it wasn’t very nice, especially as we don’t get it back in the UK, but we found a corner that wasn’t too close to any smokers.

Tomorrow we are moving from this hotel to a hotel in Dubai, so Phil and I have made sure our cases are packed and ready so we don’t have too much to do in the morning, we’ve not unpacked our cases anyway but we have still ended up with taking a few things out.

View all posts by Vanjatheviking